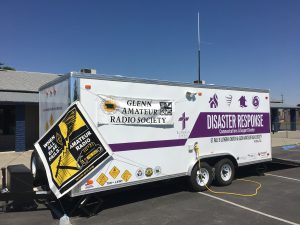 In collaboration with St. Paul’s Lutheran of Artois, GARS is configuring/outfitting a Disaster Response Trailer (DRT) to provide resources during and following a disaster. The front 8′ of the 20′ DRT is dedicated to communications HF through VHF/UHF. Both analog and digital equipment is supported. 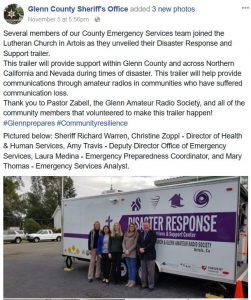 — From the Emergency and Disaster Management Digest Web site —

Radio: A Key Resource for Disasters and Homeland Security

When people think of information sources today, they automatically jump to social media and maybe TV. Radio typically doesn’t come up to the top of the stack. This is unfortunate because radio is a homeland security resource that plays a key role in communicating and informing citizens during emergencies and times of disaster.

Radio a Trusted Source for Local News and Information

The FM stations were broken down into 6,737 commercial stations and 4,130 non-commercial stations. The newcomers to the group are LPFM stations that broadcast at 100 watts to reach an area with a radius of about three and one half miles. This special class of license was established to “create opportunities for new voices to be heard on the radio.” College and university radio stations typically hold an LPFM license.

FM radio transmits via a line of sight. That restricts transmissions to receiving antennas that are not blocked by objects such as mountains or skyscraper buildings. That’s why FM broadcasts are most closely associated with local radio stations along with their newer, lower-powered cousins, the LPFM.

FM radio stations can be commercial, educational or community stations. A good example of community radio is KPFZ 11.1FM in Lakeport, California. This station is owned and operated by Lake County Community Radio, Inc., a California Public Benefit Corporation. This means that the station is designated for charitable purposes and may not be used for the private gain of any individual.

Lakeport is located in Lake County, which has had more than its share of wildfires. These have included the Jerusalem and Rocky fires in 2015, the Clayton fire in 2016, and the Mendocino Complex and Pawnee fires in 2018.

I didn’t realize the importance of community radio until August 2018, when I served as a Red Cross Public Affairs Officer at the Mendocino Complex fire, the largest wildfire in California history. My boss, the Public Affairs Chief, asked me to coordinate with the local radio station because listeners were not getting information directly from any official source. I called in to the station one evening and took any and all questions. As a result of listener interest, I was asked to come in for a formal interview the next day.

On my way to the interview I stopped at two Red Cross shelters where I found about a dozen people listening to their radios. Every one of them was tuned to KPFZ.

The station’s studio was located on the second floor of a two-story building in the historic downtown area. Many of the surrounding buildings were built in the late 1800s. The listener-funded station had only two phone lines, one for the studio and the other for the office. Nevertheless, the phone lines were quite busy during my visit and one station volunteer was busily updating listeners via Facebook.

Amateur radio, or ham radio as it is most often called, was the original electronic “social media” with initial contacts between radio stations taking place in the 1890s, Steve Aberle noted in Domestic Preparedness.

According to the American Radio Relay League (ARRL), the nation’s largest amateur radio society, Congress passed the Radio Act of 1912 requiring radio hobbyists to be licensed. The ARRL and FCC put the number of licensed amateur radio operators in the U.S. at 760,165.

ARES is active before, during and after an emergency; ARES is generally responsible for emergency messages. RACES is activated only during an emergency and briefly afterward if government emergency management officials feel they need additional communications support. RACES is usually deactivated shortly after the emergency is declared over.

Ham radio is viewed as a supplemental resource. It may be needed because the main commercial communications systems are either overloaded or inoperable.

Operators can be employed in a wide range of situations and applications. They form a communications bridge until the main capabilities are restored.

Ham radios are particularly useful because operators use a network of repeater ham stations as a way to communicate to other amateur operators around the world. The Useful Repeater Data Base Tools site helps operators find other ham repeaters in their own area or elsewhere.

Ham radio is not secure, which means that confidential information such as Personally Identifiable Information (PII) should not be transmitted over it. Ham radio is also not designed for high priority messages either. However, it is perfectly fine for lower priority or logistical message traffic.

Ham equipment can be a simple as a handheld transceiver or mobile devices configured to work inside vehicles or inside more sophisticated “radio shacks” housing a number of radios and antennas designed to function over a broad radio frequency spectrum.

Local clubs sponsor “Ham Crams” where individuals can spend a day going over the material and then taking the test. These sessions are very intense; however, the high pass rate is a testament to the method.

Despite the advent of other mass communications and social media, radio has proven itself to be a resilient and reliable source of information during disasters and other incidents. Listeners rely on their radios to provide up-to-the-minute, detailed and accurate information about what is happening. Locally focused radio is still considered more trustworthy than other media.

Through its nationwide network of ham radio operators, the Amateur Radio Relay League is a valuable resource that can bridge communications gaps during disasters and other incidents. Ham radio operators can act as an information conduit for high priority or lower priority message traffic and help governments and other organizations serve those in need.

Professor Lawrence Dietz has more than 30 years of diversified military and commercial sector experience. Dietz retired as a Colonel from the USAR in 2002, having held command and staff assignments in PSYOP and military intelligence to include platoon, company and battalion command. He also served as the Deputy Commander for the NATO PSYOP Task Force (CJICTF) in Bosnia. Specialties include PSYOP, information operations, strategic intelligence and tactical intelligence. His commercial sector experience has included market intelligence, marketing, customer support and legal work dealing with information technology. Professor Dietz is an adjunct faculty member teaching within the Intelligence Studies program at American Military University. You may contact him at Lawrence.Dietz@mycampus.amu.edu.